Full disclosure: I get a lot of my books nowadays from the library where my mom works. She’ll bring a stack of donated books home and we’ll go through them together, picking out one or two where or there to buy and then she’ll take the rest of the stack home.

This weekend, the book that jumped out to me was When the Astors Owned New York. I knew hotels were a huge thing in New York, and I read a biography a few years ago called The Phantom of Fifth Avenue, which dealt with Huguette Clark and how she basically disappeared from the world in the 1960s and wasn’t rediscovered until the 1990s. I jumped on that book as soon as I could legally buy it (I worked at the bookstore where we had a hold shelf for books until their release date). I loved it. So why not see how other rich people in early 1900s New York lived?

Endowed with the largest private fortunes of their day, two heirs of arch-capitalist John Jacob Astor battled with each other for social primacy. William Waldorf Astor (born 1848) and his cousin John Jacob Astor IV (born 1864) led incomparably privileged lives in the blaze of public attention. Novelist, sportsman, and inventor, John Jacob went down with the Titanic, after turbulent marital adventures and service in the Spanish-American War. Collector of art, antiquities, and stately homes, William Waldorf became a British subject and acquired the title of Viscount Astor.

In New York during the 1890s and after, the two feuding Astors built monumental grand hotels, chief among them the original Waldorf-Astoria on lower Fifth Avenue. The Astor hotels transformed social behavior. Home of the chafing dish and the velvet rope, the Waldorf-Astoria drew the rich, famous, and fashionable. It was the setting for the most notorious society event of the era—a costume extravaganza put on by its hosts during a time of widespread need and unemployment. The celebrity-packed lobbies, public rooms, lavish suites, and exclusive restaurants of the grand hotels became distinctive theaters of modern life. 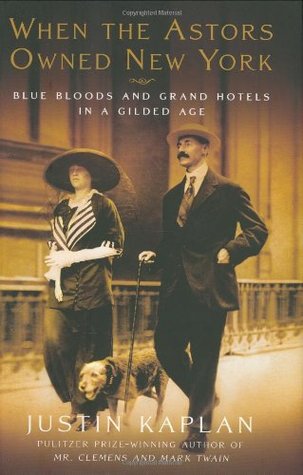 It sounded super interesting to me, so I just had to pick it up. It’s a very tiny book, clocking in at just 181 pages. I’m hoping to finish it very soon.

I’ve decided that when previewing a non-fiction book I’m not going to bother with the fiction categories that I’ve previously used. So here’s a few new ones.

Writing: Looking at the GoodReads ratings, it seems like the majority of reviewers see this as being lazily written, with the author capitalizing on the the success of his Mark Twain biography. I haven’t seen this so far, but I just finished the first chapter.

Historical Significance: the Astors were multi-multi-millionaires, back when the word millionaire was something still brand-new. John Jacob Astor (the first one) was a German immigrant who wanted to create the most luxurious hotel possible in the 1830s, and he managed it. His great-great-(great?) grandson, John Jacob Astor IV, went down with the Titanic. What happened between those dates? I want to know how this family because hotel tycoons!

Interest: I will say this is maybe only the second book I’ve ever read that deals with this specific time period and historical significance. I’ve only read The Phantom of Fifth Avenue prior to this, and that didn’t really have much to do with hotels, but rather with Huguette Clark’s reclusive life.

Rating: I’m hoping to give this a four-star rating, although the average GoodReads score is a 3.3 as of the time of this writing. I’ll keep you updated on this one.

Have you ever read this book? Are you interested in this time period? Let me know in the comments!