One of these days I’ll get back on a regular posting schedule, I swear. Until that day comes, though, you’re going to have some weeks where I post nothing and then some weeks where I post everything. I’m trying to get things under control. Ever had those times where the more you try to hold on to something, the more things you drop? That’s how I’m feeling right now…

When I was younger, I had a slight obsession with the Holocaust. Just typing that out right now is a little cringe-inducing, because when someone asks, “What’s your favorite period in history?” and you respond with an enthusiastic, “THE HOLOCAUST,” you get some weird looks. Been there, done that. I still enjoy reading about World War II, but I’m nowhere near as obsessed as I used to be.

A few weeks ago, I visited my local Barnes & Noble, and didn’t get past the first table in the store. They were having a Buy 2 Get 1 free sale, and I spent about thirty to forty minutes just looking over the table and debating on books. I ended up buying Irena’s Children, The Last Castle, and My Grandmother Told Me to Tell You She’s Sorry, which I’m really looking forward to. I picked up A Man Called Ove, because I see it being praised on nearly every blog. However, after settling in and reading the first two chapters, I put it away because I could not, could not get past the character of Ove. I hated the way he was written, and I do NOT want to struggle through the book and hating him to get to where he might be tolerable. (Fight me!)

From the New York Times bestselling author of The Widow Clicquotcomes an extraordinary and gripping account of Irena Sendler—the “female Oskar Schindler”—who took staggering risks to save 2,500 children from death and deportation in Nazi-occupied Poland during World War II.

In 1942, one young social worker, Irena Sendler, was granted access to the Warsaw ghetto as a public health specialist. While there, she reached out to the trapped Jewish families, going from door to door and asking the parents to trust her with their young children. She started smuggling them out of the walled district, convincing her friends and neighbors to hide them. Driven to extreme measures and with the help of a network of local tradesmen, ghetto residents, and her star-crossed lover in the Jewish resistance, Irena ultimately smuggled thousands of children past the Nazis. She made dangerous trips through the city’s sewers, hid children in coffins, snuck them under overcoats at checkpoints, and slipped them through secret passages in abandoned buildings.

But Irena did something even more astonishing at immense personal risk: she kept secret lists buried in bottles under an old apple tree in a friend’s back garden. On them were the names and true identities of those Jewish children, recorded with the hope that their relatives could find them after the war. She could not have known that more than ninety percent of their families would perish.

In Irena’s Children, Tilar Mazzeo tells the incredible story of this courageous and brave woman who risked her life to save innocent children from the Holocaust—a truly heroic tale of survival, resilience, and redemption. 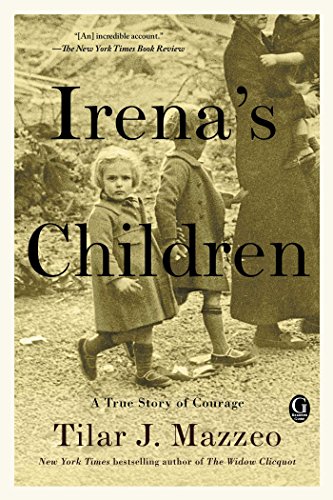 I think I’ve been doing a lot of non-fiction books lately. Maybe I’m tired of reading something that’s not real? Maybe I want to learn from the past more? I’m not sure.

Mazzeo’s style of writing is very straightforward, and I really enjoy the way they personify the characters they’re writing about. Irena was long dead before this book was written, and I hope that the way she is portrayed is at least faithful to the way she was in real life.

There is a beautiful spread of photos in the middle of the book, which is great. I always want to know what the person I’m reading about looks like, and there are several pictures of Irena throughout this spread, along with pictures of her friends (not all of whom made it out alive) and some of the children she rescued.

I know nothing about Schindler’s List, but this book is billed with Irena being “the female Schindler.” Turns out, the woman rescued over 2,500 children from the German roundups, although I’m sure she lost many more. I’m really looking forward to reading the rest of this and figuring out how it goes. I feel like this is going to be a binge-book, for sure.

It’s been a long time since I’ve read something for pleasure, and buying new books always makes me want to jump straight in and ignore the world. Let’s see how this one goes.