I’m working my way through this thesis reading list while wanting to bang my head against the wall. Not all of the books are awful, but some of them just drag on and I can’t see anything super beneficial to my reading them. However, they are on my list so I’m just going to attempt this and keep working on it. Slow and steady wins the race, right? (But not too slow.)

I’ve got my next thesis meeting on Monday with my adviser, in a little coffee shop near my office. I’ll be able to provide a full update once I get finished with that! I’m going to graduate this December no matter what, though.

Shipwrecked and cast adrift, Lemuel Gulliver wakes to find himself on Lilliput, an island inhabited by little people, whose height makes their quarrels over fashion and fame seem ridiculous. His subsequent encounters – with the crude giants of Brobdingnag, the philosophical Houyhnhnms and the brutish Yahoos – give Gulliver new, bitter insights into human behaviour. Swift’s savage satire view mankind in a distorted hall of mirrors as a diminished, magnified and finally bestial species, presenting us with an uncompromising reflection of ourselves. 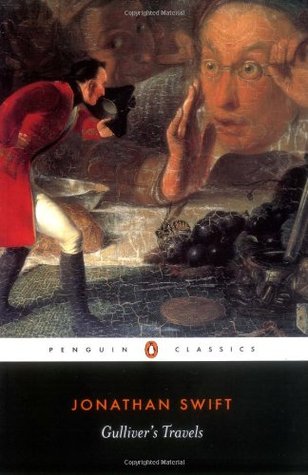 All right. So it’s a classic. I’m a fan of classics. so we’re going to see just how “classic” this goes. It does start off with that wonderful cliche of “This is a letter from the editor explaining that everything in this book is true to the best of our knowledge,” which is quickly followed up by the letter from the author explaining that “The editor has messed EVERYTHING up and nothing in this book happened the way they said it.” Already off to a great start here.

I was honestly shocked that the first adventure occurs within the first few pages. He gets on a boat and is almost immediately shipwrecked upon the island of the Lilliputs. That’s starting things off quickly, and I’m hoping that the rest of the book doesn’t slam everything in as quickly as it can. Swift seems to absolutely enjoy describing mundane details, so I’m beginning to get worried that this is going to be a slog.

I’m reading this book to look for “magical realism,” which is the idea that things can be in the real world but are just ever so slightly removed as to make it seem magical. I feel that this novel could certainly fall under the realm of magical realism, even though MR wasn’t actually “invented” until the 1920s. (Trust me, I now know a lot about MR because I’ve unfortunately read the book explaining it.)

This could be an interesting read. At some point, I’ll actually get around to putting up all of the reviews of the books I’ve read over the past few months. We’ll see if that’ll happen, though. One day. One day…