I chose this book as my Kindle First book of the month, and within the first two pages I was regretting it. I read through the reviews and looked at the other books available (a memoir, a “heartbreaking” literary fiction, and then a suspense novel that totally didn’t look interesting, and two others that I forgot within seconds of looking at their covers), and I figured, “Well, let’s see what the one marketed as “Geek Fiction” looks like.

MG Martin lives and breathes geek culture. She even works as a writer for the comic book company she idolized as a kid. But despite her love of hooded vigilantes, MG prefers her comics stay on the page.

When the too-handsome-for-his-own-good Detective Kildaire asks for her comic book expertise, MG is more than up for the adventure. Unfortunately, MG has a teeny little tendency to not follow rules. And her off-the-books sleuthing may land her in a world of trouble.

Because for every superhero, there is a supervillain. And the villain of her story may be closer than she thinks… 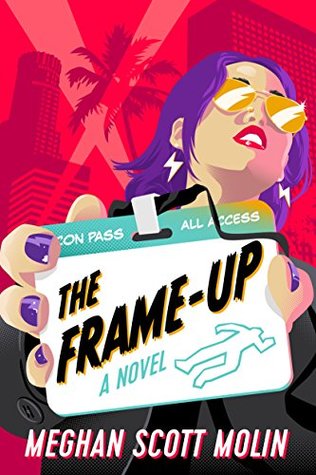 First off, her main character shares her initials. That’s not too bad, but within the first three pages it’s apparent that she’s using her character as a substitute for herself. She can’t go three words without mention the “creeps” in the coffee line, the specific electronics everyone is using (seriously, nobody says “I looked at my iPhone for the time” — they just say “I checked the time”), and how everyone, everyone sees her as “boobs first.” I mean, I understand. I’m a girl geek, too. I have been oogled before. However, those times are few and far between compared to the rest of the people who treat me like an actual human being. Maybe ten years ago when it was still “taboo” for women to be into “geek things” (which, hard eyeroll), it might have been more common. But recently? People have started to accept that.

I didn’t mean to go into a rant there, but come on. I’m only a few pages into this book and I’m already dreading reading the rest. Our main character is a self-described manic pixie dream girl (although she doesn’t use those words in that order) who uses way too much branding to get her point across. I picked it up because the story sounded promising, but I feel like it’s going to be a slog to the end.

What do I hope will happen? All of my preconceived notions about this book will go away once I get a chapter or two into it. In reality? That’s probably not going to happen, and I’m going to have to slog through the female version of Ready Player One, just with comic books instead of video games. (Seriously, though — go back and read RPO. It’s just a male fantasy with a video game skin on top.)

If I finish this book, it might only be with the help of a drinking game. (But that might lead to alcohol poisoning, so we’ll see.)

Have you read this? What are your tips for slogging through a book you just don’t want to read, but you feel obligated to because you got it as basically an ARC? Let me know in the comments!