I don’t like giving up on a book. I very rarely do so (probably a leftover quirk from my college days where I had to read a book), but when I do, it’s frustrating. 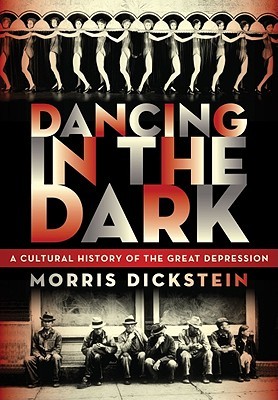 A few weeks ago I had a great coupon for ThriftBooks and decided I needed to use it. I ended up getting four books for just shy of $10, and one of those was called Dancing in the Dark: A Cultural History of the Great Depression. It was billed as an “artistic and cultural look at the Great Depression,” to which I said Heck yeah! I’ve always wanted to learn more about that side, the non-economic side! and added it to my cart.

It arrived much later than the other books, and I eagerly ripped into it when it did arrive (it was sent to my parents house, and was the only thing I had to occupy my downtime this weekend). I immediately got bogged down in the prologue, but powered through because, hey, it’s just a prologue.

Then I reached the Introduction, and things just got worse from there. I did finish reading the Introduction, and after getting a few pages into Chapter One, I knew I would not be able to continue with this book. It was not at all what I was expecting, and it was so dry and uninteresting that I knew I would spend more time hating it than enjoying it.

It’s never fun putting a book down, knowing you’ll never pick it back up. It feels like a failure, like I was unable to “get” what the author was trying to say. I remember a book called Octavian Nothing, which I attempted several times to pick up at the library but which I never actually did. Sometimes, though, you just have to accept that you won’t be able to read every book out there.

There are some people who force themselves to finish books regardless of how they feel about them, but I’ve decided that I no longer want to live my life that way. I want to be free to put down a book when I don’t like it (I think I’ll have to add Bridge of Clay to the Did-Not-Finish shelf in a bit, unfortunately) and not feel like I’ve failed. There’s only so much time in the day, and there are so many books out there. I don’t want to waste my time on something I don’t enjoy. 2019 is a year for getting my life together in many areas, and I’m going to call this getting my reading habits in shape.

What about you? Do you force yourself to finish a book even though you don’t like it? What are your rules for DNF’ing a book? Let me know in the comments!

3 thoughts on “First DNF of the Year”