Well, Internet, I went and did something on Friday that I have been wanting to do ever since I moved out on my own: I adopted my very own kitty!

As backstory, this cat has been living on a friend’s porch for several months. I saw her at our X-Wing Christmas party (Steven had to drag me inside!), and then again last Friday (the 8th) at a game night. When I left the game night, J made a joke about “Which one of you is going to take the cat?” And when I got in the car with Steven, I cried. Because I wanted that cat. He told me J probably would let me have the cat. So I reached out, and J said yes. I was over the moon.

I spent the next week researching pet supplies and ordering them in, not to mention setting up a vet appointment. I had all the stuff (over $200 from Chewy!) shipped to a friend’s house for me to pick up. I picked it up Wednesday and spent the rest of the night putting everything in place and cleaning.

On Friday, I got to J’s at 8 am. The cat wasn’t there in her box, and D said usually if she sits for a minute, the cat will appear, so we sat on the porch and talked for less than ten minutes before kitty appeared. I put down the can of cat food and went to get the crate while she was distracted. She almost finished the food before I got back from the car. I know she’s been starving, and I am upset. She’s so sweet that I knew she had an owner.

I stayed and talked for a while before taking the cat to the vet. The appointment was at 10, but I had kitty in the box by 8:30. While sitting in the office, Steven texted and said his mom was going to come by. I was at the vet they had been using for decades at that point. Mrs. Ford showed up, because she said “if I didn’t see her now, I might not see her again!”

I am so thankful she did. The cat had a chip, which almost devastated me. It was registered to an address nearly 30 miles or more away from where the cat was found. The vet said they would contact the company (privacy laws and all that) and figure out if the owner still wanted her. I decided to leave kitty there until they figured out what was going on, but even before I left, they came back and said the owner had called them back! They had surrendered kitty to a friend in the countryside over a year ago to be a barn cat, because kitty kept bringing dead animals in. She’s been on D’s porch for months so it’s obvious the barn owner didn’t feed her. (Most “barn cat” people assume the cat will only eat mice. But they still need love and affection!) 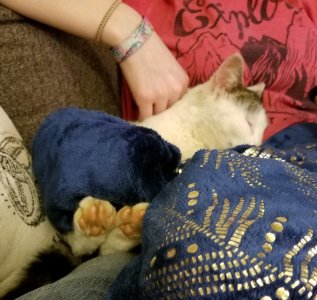 The owner told the vet she had no problem with me taking the cat, but she wanted to double check with the barn owner first. Mrs. Ford was pretty positive, because she knew Barn cats are a dime a dozen, and the vet himself was super confident they would give me the cat.

Mrs. Ford took me back to her house to have cinnamon rolls while we waited for the owner to call barn friend, but before I even got to her house the vet called and said she was mine! I cried and ran to tell her as soon as we got to her house. We had celebratory cinnamon rolls, and sat around talking since I knew she wouldn’t be ready until 4. It was great just sitting and talking with her, and I almost cried several times just knowing she would be mine.

I left the Fords around 2 (since she had an appointment) and went to Home Goods (where I got a kitty bowl and a box of poop bags) and then Pet Smart (where I got some treats and more toys) before going to sit in the vet lot and charge my phone. I went inside at 3:50. While I was waiting, a woman and her boyfriend brought in a dying dog, and she was sobbing. Turns out he had died in the car on the way in, and the vet sat in the waiting room with them (with me there!) to explain their options. My heart broke and I was sobbing too. As I was waiting for kitty, I gave her a hug and cried with her.

Kitty came out with a clean bill of health! However, since she has been an outside cat, she does have lung worms and I have to bring poop back in three weeks for an evaluation. So I have two medicines to give her, one a liquid in a syringe and one a powder for her food. Once we got home, she went under the couch for less than five minutes before she was sitting in my lap like she’d been mine for years.

Steven showed up a few hours later, and she alternated between me and Steven the rest of the night. This is the best day. And she slept with in the bed with me all night.

It is very clear she was meant to be a house cat. I spent several agonizing days trying to figure out whether to name her Kiki or River, but in the end Kiki won out. It’s fun to say and the repetition might get her attention. She has had three doses of her syringe and done well with both, and has scraped her wet food bowl with the powder medicine clean. I even got her a cat water fountain and she loves it, too!

I am so in love with this cat, and I can’t wait to see how she looks when she gains a little weight and becomes a little more trusting with me. My life is complete…for now.

I know this isn’t my usual schedule of posts, but I knew I had to share this with y’all, since it’s a major life change. Thank you for sticking with me!