This week’s First Impression Friday belongs to yet another Fantastic Strangling book club book: They Did Bad Things by Lauren A. Forry. I am so excited by all of the books that have been chosen so far, and I am even more excited about the fact that all of them are newly-published, so I don’t have time to form opinions on the books before I read them for myself (because isn’t that the worst?).

This month’s book (well, June’s book – we’re playing catch-up here) is a thriller and the description makes me extra-excited to read it.

In 1995, six university students moved into the house at 215 Caldwell Street. Months later, one of them was found dead on the sofa the morning after their end-of-year party. His death was ruled an accident by the police. The remaining five all knew it wasn’t, and though they went on with their lives, the truth of what happened to their sixth housemate couldn’t stay buried forever.

Twenty years later, all five of them arrive—lured separately under various pretenses—at Wolfheather House, a crumbling, secluded mansion on the Scottish isle of Doon. Trapped inside with no way out and no signal to the outside world, the now forty-somethings fight each other—and the unknown mastermind behind their gathering—as they confront the role they played in their housemate’s death. They are given one choice: confess to their crimes or die.

They Did Bad Things is a deviously clever psychological thriller about the banality of evil and the human capacity for committing horror. 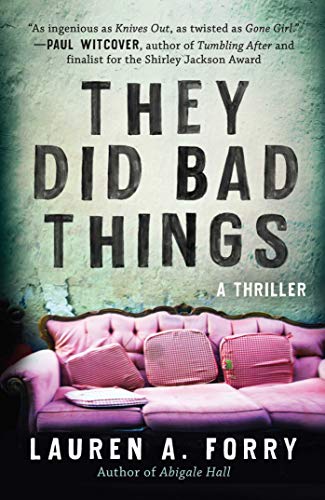 I’m going to come right out and say that I’m not a fan of horror books, but if you remember The Southern Book Club’s Guide to Slaying Vampires, I enjoyed that one and I’m pretty sure that this one isn’t going to be nearly as “horror”-like as that book. At least, that’s my hope.

The book starts out with Hollis Drummond getting lost in a storm on the way to a vacation, on the aptly-named Isle of Doom somewhere in British waters. (You can tell it’s Britain because it’s raining.) He’s a police officer, and maybe it’s because I’m not British but I can’t tell exactly why he’s here. Something about a final vacation before something important happens. By the end of the first chapter, he’s safely arrived at the house, checked in with a concierge-who’s-not-a-concierge who likes to cuss a lot, explored his room, and found out that four people from his past are also staying here. Chapter One ends with him telling himself that he needs to run, as fast and as far as he can.

There are diary pages throughout the book, and they seem to be put between each chapter as a way to see the killer’s true eyes (instead of like In Then There Were None, when the letter from the killer is revealed at the very end), although some pages are missing. We’re told from the start that this is the killer’s diary, and I’m looking forward to seeing how things start to tie together in the future.

Considering that And Then There Were None was my first mystery book (and then I got super into the Cat Who series by Lilian Jackson Braun), I’m very excited to read this one. I am definitely already getting Christie-vibes off of this, and I’m looking forward to seeing how it all comes together. I’m expecting this to be another highly rated one, so we’ll see what happens!